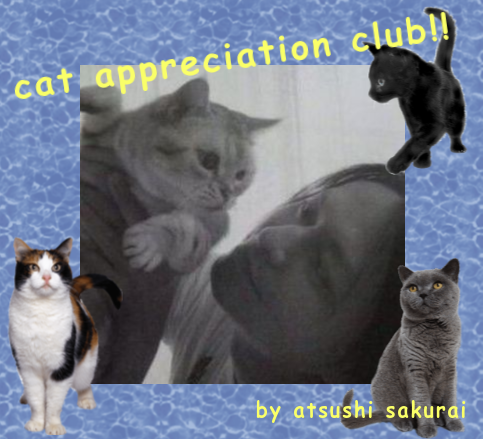 Is your idea of heaven a glass of wine, a book, and twenty cats lying on top of you?
Do you hate talking to anyone who has less than four legs and isn't a cat?
Do you hate speaking in general?

Do you ever think, "I wish I wasn't born into this species which requires spoken communication, and were instead a cat?"
Have you ever told people, "sorry, I have plans" to avoid socialization and then stayed home and drank alone with your cat?

We don't like conflict, so we're both the co-presidents of the Cat Appreciation Club. Pata supplies the alcohol and I (Atsushi) supply the cats. Don't ask where or how. The important thing is not where the cats come from, the important thing is that they are cats and I love them all.

Kozi is banned from the Cat Appreciation Club on an official basis for trying to start a kitten fighting ring during club hours, but we're still cool with him and he drops in every now and then. Newcomers please be warned: if he tries to get you to bet on the kitten called "Quicksilver Johnny" DO NOT ACCEPT THE OFFER.