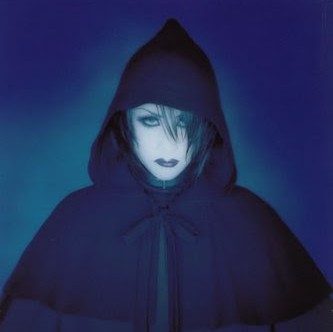 - In charge of all espionage and spy operations 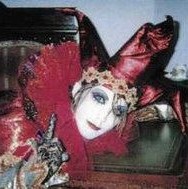 - In charge of all goat-related activities 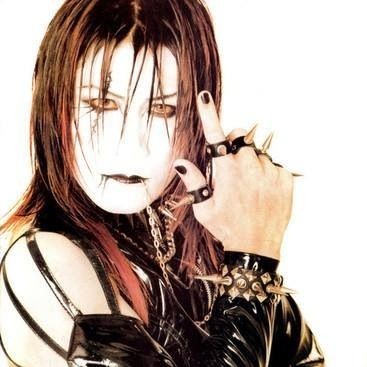 - In charge of making the nachos

The French Culture Club of 1996, although shortlived, left a mark on Shinjuku East Community College. Literally, a five foot diameter pentagram was burned into the floorboards of the clubroom, resulting in bizarre supernatural phenomena affecting those unlucky students who had to attend classes in the room.

Though they were forbidden from being in a club together after the Zæðruṣriål incident, they later formed the Goth Advocacy and Outreach Association, to connect with others who had been, quote, "unfairly targeted by the student council POSERS for TOTALLY NORMAL goth activities."

"That Mana guy is creepy as fuck! I heard the reason he never opens his mouth or talks is because he's got three rows of sharp teeth like a fucking shark. Normally I wouldn't believe that, but if it's Mana- yeah, totally. One hundred percent."

Sure, it was fun at first, there were some hot chicks, but then the Mana... guy? girl? I dunno- they started drawing pentagrams in blood on the floor and the freaky clown dude was chanting, and all of a sudden there was this HUGE blast of yellow smoke! It smelled like rotten eggs, and out of the smoke came this random naked dude.

What struck me was his eyes... his eyes were evil. There was no warmth, or emotion- and his face, it was so perfect it was unsettling, like a plastic doll or something- man, it was weird. I got the fuck out of there, fast.

I heard later that the French club indoctrinated him as one of their own, started calling him Gackt and bringing him places. I ran into him a couple times and it was weird, he kept calling me his 'Moonchild' and asking me to be in his movie.

After a while he stopped showing up. Turns out Mana got sick of him and banished him back to the shadow realm or some shit. That's what I was told, at least, but I swear...you'll think I'm crazy, but I swear sometimes late at night outside my bedroom window I hear a tapping and then a whisper of, "Hey. Hey, it's me, Gackt. Wanna be in my movie?""

- Hyde, sophomore, has deep circles under his eyes and jumps at sudden movements, recently announced his role in a movie called Moonchild

"See, I don't get what the big deal about Mana is. Like, what does he have that I don't have? He's not that tall, I'm not... as tall as some people; he wears makeup, I wear makeup; he wears weird goth brand clothes, I wear Gucci- yes, actual Gucci. You think Mana would eat pussy? Guy never even opens his mouth.

I eat pussy because

- Kyo, freshman, cries if his chicken nuggets are still cold in the middle when he takes them out of the oven

"I once saw Mana put hot sauce on a jalapeño, set the whole thing on fire, eat it, and then complain that it wasn't spicy enough. And I thought I had weird eating habits."

- Yuki, third-year, has been champion of the annual "Extreme Facial Hair" competition for the past 237 years

"Mana's a funky lil fucker. I've known him for about four years now, and I've still never heard his voice. Once he sneezed in December of 1993 and it was the greatest moment of my life. For weeks after I kept putting pepper on all of his things to try and get him to sneeze again, but he eats so much spicy food he was immune. I'll get him someday, though. Someday..."

"Mana and I get along really well because he doesn't talk and I don't like talking to people. We used to hang out once a week; he'd play video games while I read. We got in a bit of a fight because one of my cats ate some of his sea monkeys though, and haven't talked since. I'm not sure when the fight will be over because we never talked in the first place. Actually, I'm not sure if we're even in a fight. It's been three years and I have no clue what to do. Someone help me, please!"

"Is nobody going the mention the fact that Mana has no nose?!? No one? Really?? You're just gonna ignore that?! He has NO NOSE!!! You don't find that weird? Anyone?"

- Yoshiki, fourth year, student council treasurer, was prom queen in high school and hasn't shut up about it since

"You know how sometimes in the news you read about dumb shit some "Florida Man" has done? Nine times out of ten, Kozi's already done that shit, just gotten away with it, and in the middle of Shinjuku in broad daylight. I don't know how he does it, he's just That Dude."

- Yuki, third year, may or may not have been responsible for the assassination of Franz Ferdinand

"The thing about Kozi is, if you ask him a straightforward question, he'll answer it in the most bizarre way possible. So in order to get anything useful out of him, you have to obfuscate the original meaning of whatever you were trying to say. For example, if you ask him his birthday, he'll say something like "I hatched when the clouds parted in the 3rd hemisphere of Zorgon,"

but if you ask him on what day he "piddly-popped out his momma clown's hiddly-hoo" he'll say normally, "May 29.""

- Kami, long-time friend of Kozi's and avid melon enthusiast, once got his head stuck in a fence and it took three men and a pound of butter to pull him out

"Kozi's chill. He hangs out with me under the bridge sometimes. We have similar fashion sense, I used to let him borrow my shirts until they would all come back singed or smelling like old cheese or with...questionable holes. I didn't necessarily mind the damage persay, it's more about the principle of the thing, you know. If he wants to commit arson against 23 different Chuck-E-Cheese establishments,

as a friend I support him fully, but I just don't want him wearing my favorite shirt while doing it. It's the principle of the thing, the principle."

- Imai Hisashi, fourth year, owns an impressive amount of vaguely raggedy Hawaiian shirts that may or may not have been 'liberated' from a shipwrecked cruise boat in 2007

"Once, when Kozi and I were drinking together, he told me that he can communicate with goats and that goats were the real culprits behind 9/11. Now, normally if someone told me they could speak to goats I wouldn't believe them, but if it's Kozi- yeah, 100%. Speaking to goats isn't even the weirdest thing that guy does."

- Pata, doesn't go to this school but always shows up for pizza day in the cafeteria, can usually be found drinking rubbing alcohol in the nursing student lab

- Shinya, first-year, doesn't talk much but somehow gets invited to all the parties, may or may not actually be a large praying mantis in a human skin suit

"I heard that Mana and Kozi met while studying at the famous Conservatory for Gifted Mimes in Paris. I tried asking Kozi about it, but he just shrugged and said 'Schmoodle.' What does that mean? Is it French? A special mime language? Someone tell me, please! I'm going insane trying to figure out what 'schmoodle' is!"

- Toshi, sixth-year, lovable jock with an affinity for pancakes, is easily troubled by trivial matters

"Yuki once said he was around for Jesus Christ's crucifixion. Or maybe it was that he is Jesus Christ, I can't remember. Either way, I believe him."

- Hyde, second-year, thinks vampires are cool in theory, but also really likes salad and isn't willing to give that up just yet

"Yuki says the reason he sleeps in the bathtub is because he can't afford a coffin, but the guy has, like, five different bass guitars. I'm not saying he's lying, but something just doesn't add up."

- Kaoru, third year, too inquisitive for his own good (was later found passed out with mysterious puncture wounds in his neck)